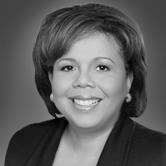 Sharon Jones is a lawyer by training and has specialized in providing diversity/inclusion strategy consulting to leaders of law firms, corporations, government and not for profit organizations. Ms. Jones has also served as Chief Operating Officer and Executive Vice-President for the Chicago Urban League, a community based organization focused on economic development within the African American community.

Ms. Jones has practiced law and been a community leader over a 30-year career, including positions as a federal prosecutor, with major law firms and with Fortune 500 Corporations. She has been highly successful as a litigator, strategist, manager, counselor, an educator, and a problem-solver with regard to extremely complex and sensitive matters. From 1985-1989, Sharon served as an Assistant United States Attorney for the Northern District of Illinois, based in Chicago, where she conducted federal grand jury investigations and trials in high profile white-collar criminal cases. In private law practice, she was a partner at Bird, Marella, Boxer, Wolpert & Matz in Los Angeles. She has taught Trial Advocacy, both as an Adjunct Professor at Northwestern Law School and at the National Institute for Trial Advocacy. In the corporate sector, Ms. Jones managed litigation matters worldwide for Abbott Laboratories, advised senior leadership in matters of crisis management, and fashioned creative solutions to highly complex business issues. She has also acted as Senior Counsel at SBC Communications (now AT&T).

She is a co-author of two bar association reports providing consulting advice to Los Angeles County: “The City in Crisis—A Report by the Special Advisor to the Board of Police Commissioners on the Civil Disorder in Los Angeles” (October 1992) and “Report of the Los Angeles County Bar Association Advisory Committee for the Office of the District Attorney” (September 1994). Ms. Jones served as Counsel of Record in the amicus curiae briefs of two cases filed in the United States Supreme Court by the Black Women Lawyers Association of Chicago; in Grutter v. Bollinger and the University of Michigan (2003) she supported diversity in higher education, and in Parents Involved in Community Schools v. Seattle School District (2006) she supported the right to voluntarily desegregate public schools in order to increase diversity.

Ms. Jones is a past President and co-founder of the Black Women Lawyers Association of Chicago. She is a past elected Director of the Harvard Alumni Association and served on the Board of Directors for the National Association of Women Lawyers. Ms. Jones has served on the Board of Directors for the Harvard Law Society of Illinois and Women Employed. She currently serves a board member the Federal Defender Program of Illinois. Ms. Jones is a past Chair of the Chicago Bar Association Committee on Racial & Ethnic Diversity and was instrumental in the 2006 adoption of the Chicago Bar Association’s Diversity Initiative and Commitments on Racial & Ethnic Diversity for law firms and corporate legal departments. Ms. Jones served as President of the Harvard Law School Alumni Association and is an alumnus of Leadership Greater Chicago. She has also conducted racial equity programming at the Aspen Institute in Aspen, Colorado.

Ms. Jones has received numerous awards including the Black Women Lawyers Association of Chicago’s Woman of Vision Award (2006); Chicago Bar Association’s Breaking Barriers, Building Bridges Award (2008); and the Young Women’s Leadership Charter School’s Industry Leader Award (2008).  She is co-founder of the Association of Black Radcliffe Women (1975) and Black Women Lawyers Association of Chicago (1986), two organizations which continue to thrive. Ms. Jones is a co-author of a guide published by the American Bar Association in May 2004 entitled, “Walking the Talk: Creating a Law Firm Culture Where Women Succeed” which deals with the retention and promotion of women in law firms. She is a contributing author of The Diversity Agenda: Lessons and Guidance from the Legal Profession (published in April 2018), writing on the topic of “Structural Equity: Key Components for a Successful Inclusion Initiative.” Ms. Jones is the author of Mastering the Game: Strategies for Career Success (published in 2018 and available on Amazon).

Ms. Jones is a graduate of Harvard Law School and Harvard College with a degree in Economics.